Why are many organizations fear-based!?

Is your organization fear-based?

I will explain what I think managers on all levels need to do in order to turn a fear-based organization around.

How would you go about making sure mistakes/errors do not occur? Perhaps more rules and measures to control the processes and the way your employees work!? I argue that in many cases this is the wrong way to be looking at things, and I would argue that these organizations probably are managed by fear. Not in a despotic way but in a way where you focus on reducing mistakes and errors. Trying to control that errors and mistakes do not occur is like sitting in a rocking chair, it gives you something to do but it doesn’t get you anywhere.

The fear-based organization allows a mental state called psychological danger to flourish, you need to move away from that state into psychological safety. You can see the main characteristics of the two states in the chart below. 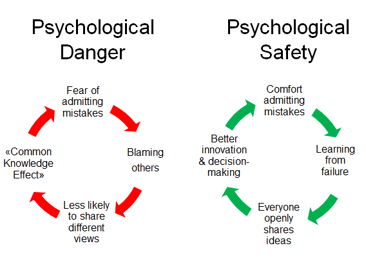 Don’t let fear control you or your organization

For the sake of the argument, lets use the parable of an aquarium again, where the aquarium is the company, the water is the environment in the workplace and the fish are the employees. If you want your fish to prosper and develop you must make sure the water in the aquarium is clean and full of healthy oxygen or the water will stagnate, and the sight will be blurred, and the fish will lose its direction. Way too many organizations think they have healthy water surrounding the fish, but their vision has been blurred by fear. It takes a courageous and insightful leader to reflect on the own organization and face the fear most of us have. Isn’t it better to have the courage to face what you are afraid of and have a chance to clean and make the water clear and healthy again!? I think so!

Hierarchies – should they be avoided!?

Having a flat organization or being network based has been hot topics for several years now. But even in these “non-hierarchical” network-based organization there’s hierarchies that set the rules and norms. These rules and norms are often powered by fear and will eventually have negative implications even though it might not be visible to the naked eye. So, is hierarchy really the problem or is it the norm that is powered by fear that make the employees to choose not to report a mistake/error and hence allow the company to perform in a sub-optimal way?

Is failing the way to success?

According to Thomas Edison failure doesn’t exist, as he didn’t fail 10.000 times before he managed to create the light bulb, he just found 10.000 ways not to create a light bulb. If the norm in an organization was based on Edison’s mindset a lot more employees and managers would dare to speak up if they believe they have found an error or if they had made a mistake. However, in a more and more competitive world we falsely believe that performance and results should be in focus which leads to people taking shortcuts to avoid pain. It’s easier not to report or speak up and avoid the risk of getting a negative reaction from your managers or senior executives.

How to create a fearless organization?

Psychological safety has been defined as being able to show and employ one's self without fear of negative consequences of self-image, status or career. One need to create psychological safety within one’s organization to enable the group to perform at its best. It doesn’t matter how much potential your organization has if the employees don’t put in a full effort because they are afraid that if they make a mistake they are being replaced.

To create psychological safety, you need to:

Unleash the power within

If an organization dare to focus on making sure there is an open and forgiving environment for the employees and managers where one feels safe speaking up about errors, mistakes or issues the company will perform much better. I argue that senior executives get in their own way due to preconceived ideas that we all have to a certain degree, and they need to focus more on creating an environment where they really allow their employees to have a say and I am convinced that will help the company to grow and prosper much faster. However, some managers or senior executives might raise the issue of not having time or money to stop and reflect over your organization, but that is like saying you don’t have time to stop to re-fuel the car because you need to keep driving. It will definitely not get you where you want to go, and you will probably lose a lot of great people and great ideas on the way.

The fearless organization where the employees actually feel safe speaking up no matter what the mistake, error or issue is, that is the organization that will be successful and prosperous over time. It's time to unleash the power within!

If you want to discuss or know more on this topic please reach out to Nicklas Dackheden.